For women over the age of 40, getting a yearly screening mammogram is essential and recommended part of maintaining their ideal preventive measures in the battle against Breast Cancer.

For women over the age of 40, getting a yearly screening mammogram is essential and recommended part of maintaining their ideal preventive measures in the battle against Breast Cancer. Digital breast tomosynthesis (DBT), also known as 3-D mammography, is an imaging technology that uses a series of low-dose mammographic exposures to provide a 3-D reconstruction of the breast. In studies comparing both technologies on the same women, 3-D Mammography has proven to be more sensitive than 2-D digital mammography in detecting cancers. 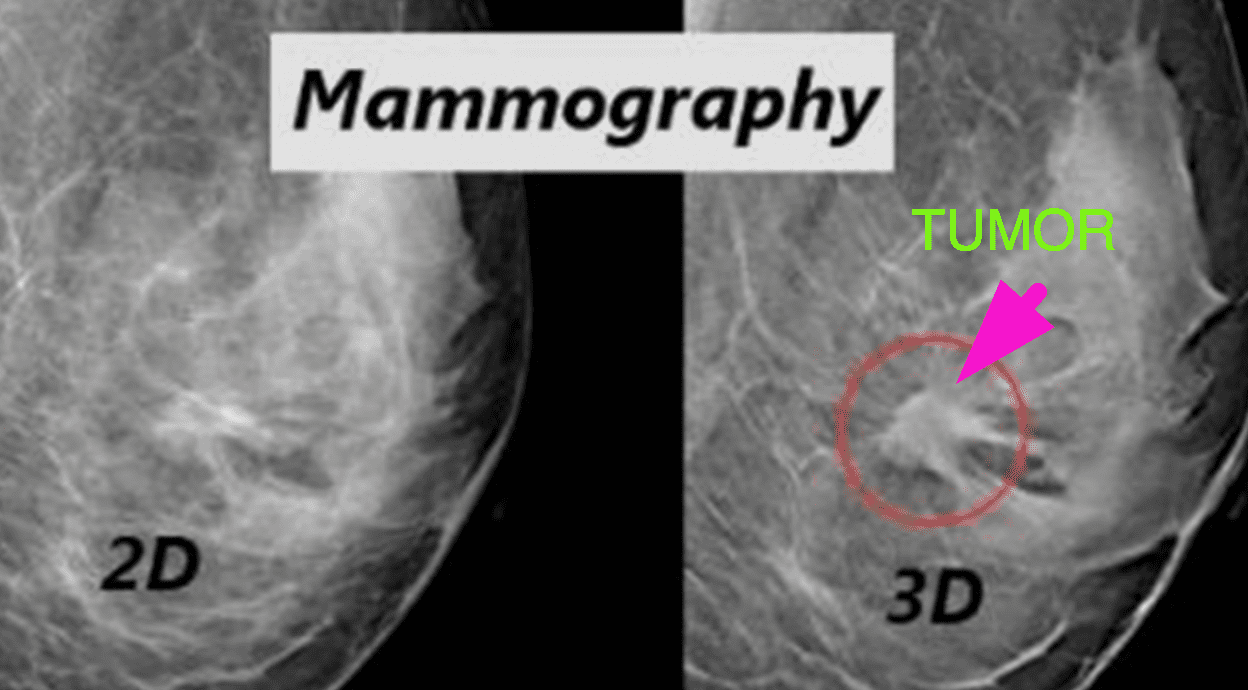 Technically,Mammography is a low-dose X-ray that allows radiologists to look for changes in breast tissue. The gold standard in breast cancer screening has been 2D digital mammography, which takes two X-ray images of the breast, one from the top and one from the side. It identifies a large number of breast cancers, but its value is limited: The imag es are flat, making them more difficult to interpret because overlapping tissue can hide cancerous tumors.

What is 3D mammography? 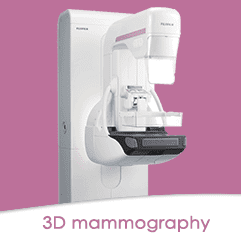 Three-dimensional mammography (also called digital breast tomosynthesis, digital tomosynthesis, or just tomosynthesis) creates a three-dimensional picture of the breast using low-dose X-rays. 3D mammography is an imaging procedure in which an X-ray moves in an arc over the breast, taking multiple images from different angles. The 3D pictures are synthesized by a computer into thin, 1-millimeter images, making it easier to see tumors. The radiologist reviews about 200-300 images with 3D mammography, compared to only four derived from a 2D mammogram.

The fight against breast cancer is not one-dimensional.

ASPIRE Cristalle with Digital Breast Tomosynthesis (DBT)or3D Mammography is built smarter because it is built with insight into image quality, operational excellence, and better patient experience.

Advancements in technology have improved screening quality while decreasing the need for additional images. In 2011, the Food and Drug Administration approved the use of tomosynthesis or 3D screening mammography. Since then, multiple studies have found that 3D screenings have reduced the need to recall patients for additional images up to 17 percent. “The 3D mammogram is really proving itself to be a better mammogram in that it reduces the need for additional views and may reduce patients’ anxiety,” says Dr. Queens, a Diagnostic Breast Imager at Roswell Park Comprehensive Cancer Center. “It’s also a more sensitive mammogram for picking up small breast cancers.”Occasionally, the positioning of a woman’s breast during her mammogram will cause the breast tissue to overlap. When reviewing the images, that overlapping tissue can look similar to a mass within the breast. “With a 2D screening, if there’s a question of overlapping breast tissue, the patient will need to come back in for additional mammogram pictures. With the 3D screening, instead of having to repeat images for overlapping tissue, we can often see it clearly on the first screening,” says Dr. Quinn. “A 3D mammogram allows us to scroll through a mammogram like flipping through the pages of a book. It also adds another layer of confidence that you can scan through the tissue and see that there is no underlying mass.”One of the great features of3D mammography is that each view is divided into multiple one-millimeter sections of the breast. She said this gives breast cancer less of a chance to hide and gives the doctors more information about the breast. Patients are less likely to need to return than with a 2D mammogram. According to a news release, 3D mammography finds 20 to 30 percent more cancers than 2D. One improvement of this new machine is instead of a flat surface that squishes the breast, it uses smart curve compression that conforms to the shape of the breast. Early detection allows patients to take advantage of improved surgery and chemotherapy options.

A number of studies have found that 3D mammograms find more cancers than traditional 2D mammograms and also reduce the number of false positives. A false positive is when a mammogram shows an abnormal area that looks like cancer but turns out to be normal. Breast cancers found with 3D mammography were more likely to be smaller and node-negative (meaning they had not spread to the lymph nodes) compared to breast cancers found with standard digital mammography, according to a study. The use of3-D mammography may significantly reduce the number of women who undergo breast biopsy for a non-cancerous lesion following an abnormal mammogram, according to a new study published in the journal Radiology.

The mammogram and the cancer screening debate

The rate of false positives has helped fuel the ongoing debate about the value of screening mammograms, especially for women younger than 50. In October 2015, the American Cancer Society recommended that women at average risk of breast cancer start annual screening mammograms at age 45 (instead of 40). 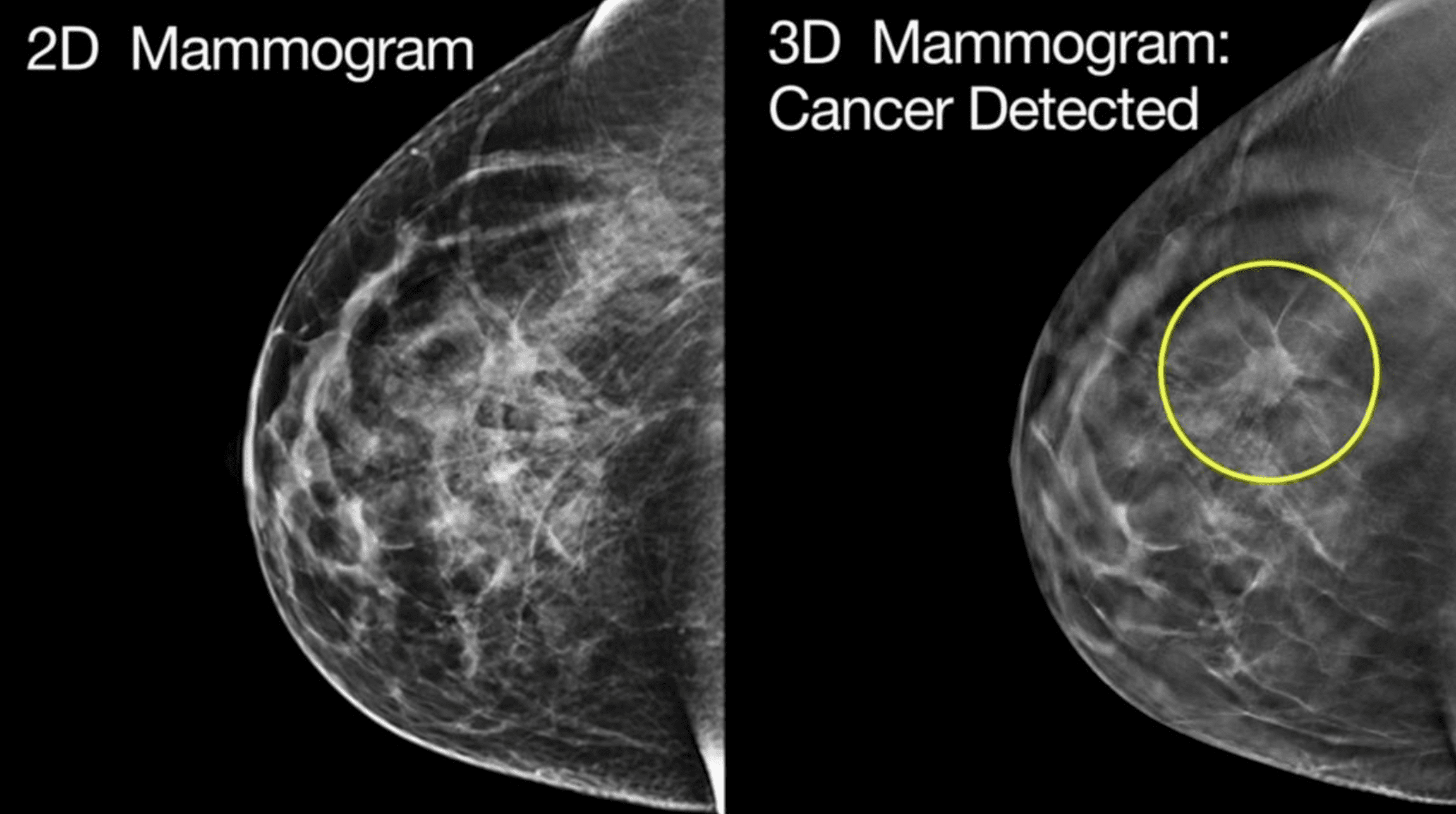 “The issue for women ages 40 to 49 is that with conventional 2D mammography there are clearly too many false positives,” said Emily Conant, M.D., chief of breast imaging and professor of radiology at the University of Pennsylvania Medical Center and member of the Breastcancer.org Professional Advisory Board. “At the same time, we can’t even find some of the cancers on 2D mammography. Many of the false positives in this age group are because the mammogram is their first, or ‘baseline,’ with no earlier mammograms to compare it to so the radiologist can say, ‘Oh, that is the way her breasts have always been — this is just normal for her.’” Conant was one of the authors of a 2016 study that found the benefits of 3D mammograms last over time. “The findings reaffirmed that 3D mammography is a better mammogram for breast cancer screening,” she said.

How the study was done and results

The study compared the results of 3D mammograms and conventional 2D digital mammograms done on 96,269 women age40 to 74. The women had the screening mammograms between 2011 and 2014.

Overall, the study found that screening with 3D mammography increased breast cancer detection rates by about 40%.

Screening with 3D mammography seemed to find breast cancers at an earlier, more treatable stage in these younger women. For women age 40 to 49:

“Our results support the evolving literature showing that screening with [3D mammography] simultaneously improves breast cancer detection while reducing false-positive recalls,” Conant and her colleagues wrote. “Although these smaller cancers may not have transformed into more aggressive subtypes, they are expected to be associated with better long-term prognosis.”

Another significant study supporting the accuracy of 3-D Mammography was published online on February 28 by JAMA Oncology. 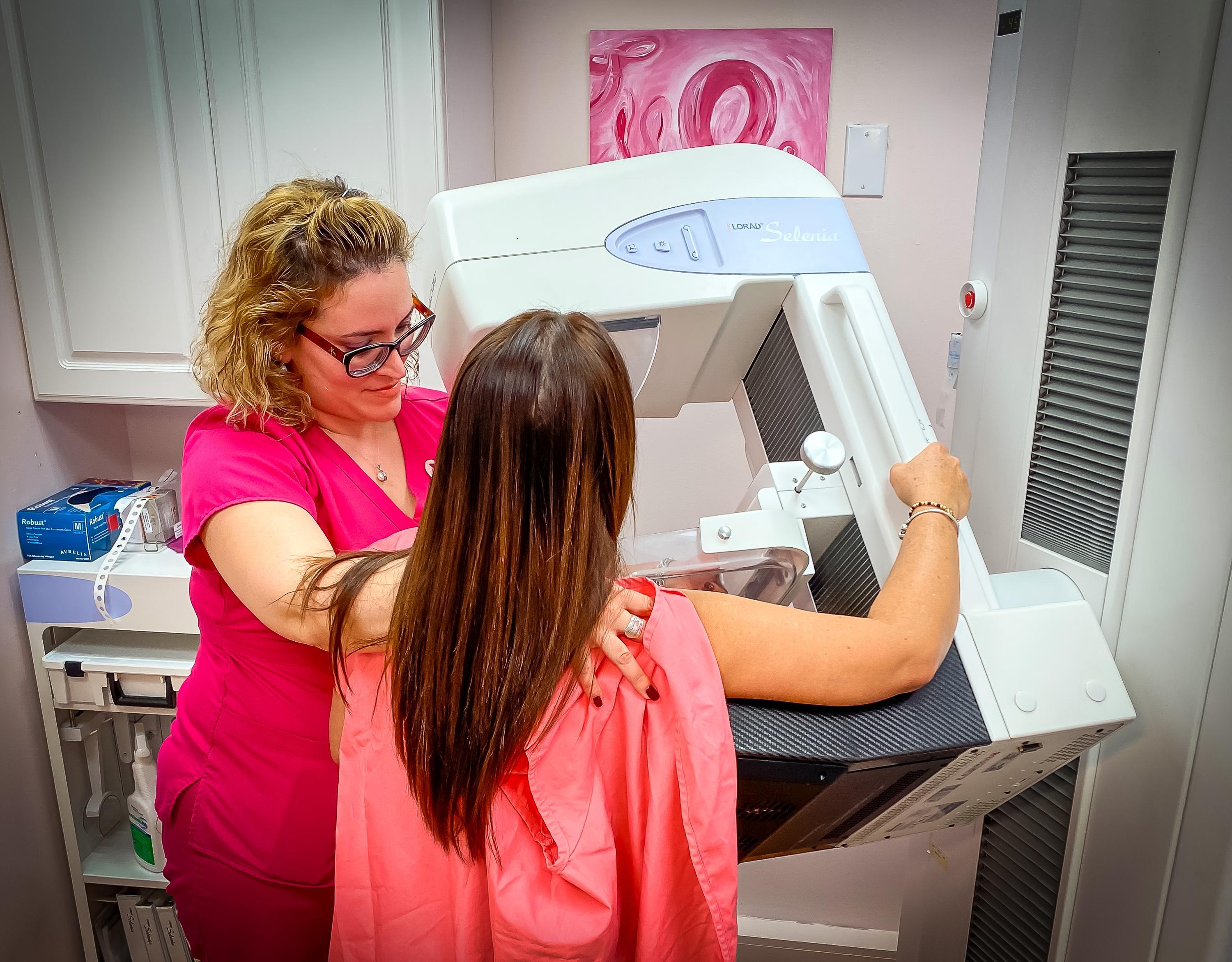 A review of more than 170,000 screening mammograms using the two technologies determined that DBT — sometimes referred to as 3D mammography — did a better job at accurately detecting cancers in women of all ages. The advantages were most pronounced for women in their 40s. DBT was also better at finding cancers in women with high breast density, which can make cancers more difficult to spot on screening exams. High density indicates a larger proportion of active tissue in the breast and is a risk factor for breast cancer.

“This study contributes to what is already a fair amount of evidence that shows, particularly for younger women and women who have denser breasts, that DBT is probably a better screening test,” says Dr. Jennifer Haas, one of the study’s authors and a professor of medicine at Harvard Medical School.

DBT is a relatively new technology, approved by the FDA in 2011. It works by taking a series of images, which a computer then assembles into a 3D-like image of breast slices. Traditional digital mammography creates a two-dimensional image of a flattened breast, and the radiologist must peer through the layers to find abnormalities. 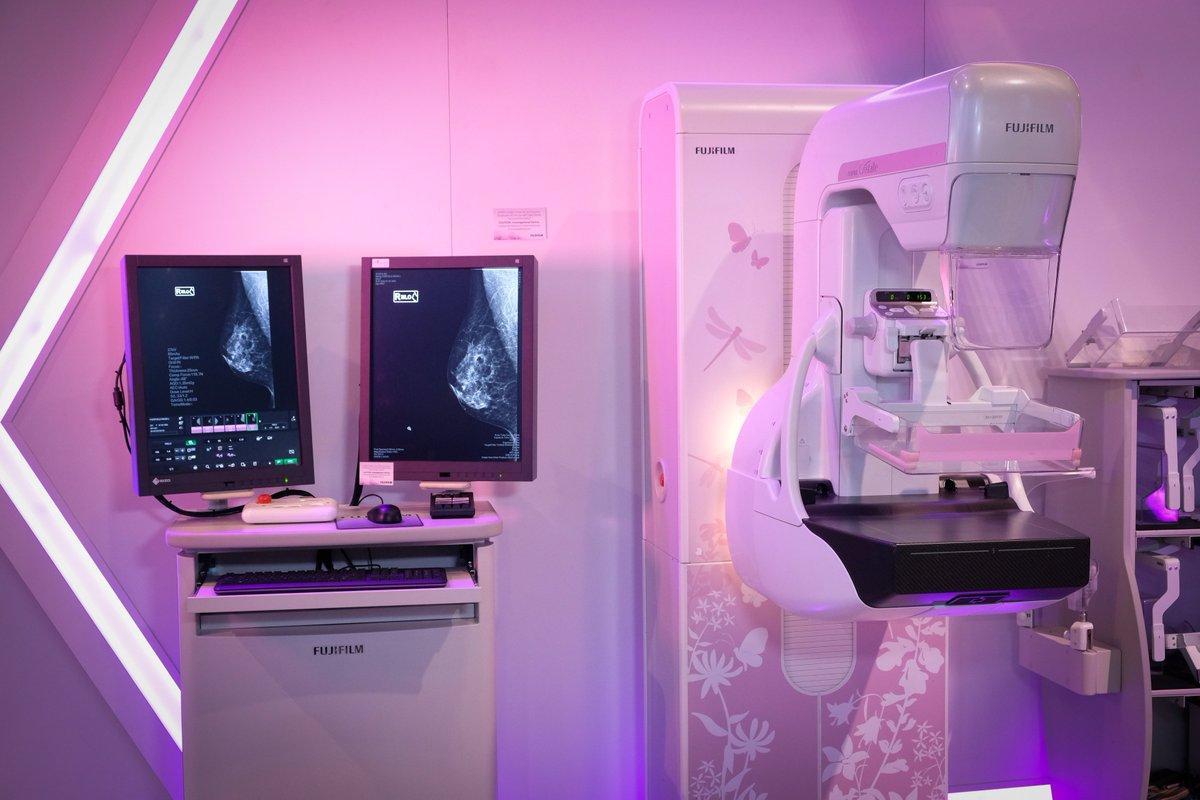 The study authors compared the two technologies using more than 50,000 breast screenings performed with DBT and 129,369 performed with digital mammography. The data represented more than 96,000 women (average age 54 to 56) screened at three different research centers from 2011 to 2014.

The study’s strengths are the large sample size and how it was designed to measure the experience of women in real clinical practice, says Dr. Haas.

“In contrast to participants in a clinical trial, this study examined the outcomes of women receiving care in a variety of clinical practices. It represents a group of women who are typical of those who get annual mammographic screenings,” she says.

Study authors found that DBT produced higher cancer detection rates and fewer unnecessary callbacks in women of all ages. But the technology performed particularly well on women in their 40s. In this group, DBT found 1.7 more cancers than digital mammography for every 1,000 exams of women with normal breast tissue. In addition, 16.3% of women in this age group who were screened using digital mammography received callbacks, versus 11.7% of those screened using DBT. For younger women with dense breasts, the advantage of DBT was even greater: 2.27 more cancers were found for every 1,000 women screened.

Women with high breast density have long represented a challenge for radiologists. Dense tissue and cancers both show up as white areas on screening mammograms, making it difficult for the radiologist reading the exam to distinguish between normal and abnormal tissue. Some radiologists have described looking for cancer on these images as trying to find a polar bear in a snowstorm.

It seems likely that finding invasive cancer before it spreads will mean a better long-term prognosis. But more research is needed to confirm this theory and to determine whether DBT produces better breast cancer outcomes than screening with digital mammography.

Who should get 3D mammograms, and at what age should they start them?

All women should get them, especially if they have dense breasts; about 50% of women do. The availability and popularity of 3D mammography have grown notably since the Food and Drug Administration (FDA) approved it in 2011.

Yearly screening should start at age 40 for patients with an average risk for breast cancer. Women with a gene mutation such as BRCA 1 or BRCA 2, or those with a strong family history of breast cancer, should consult with their physicians—but normally we recommend they get their first 3D mammograms at age 30.

Do women have to worry about false-positive results with 3D mammography?

False positives in breast imaging occur when a mammogram shows an abnormal area that turns out not to be a cancerous growth. With 2D mammography, 1 in 10 patients is recalled for something that may look suspicious and thus requires additional imaging. With 3D mammography, that happens less frequently.

What are the benefits for you?

Three-dimensional mammography technology seems to be being adopted faster throughout the United States than conventional 2D digital mammography was. According to 2018 statistics from the FDA, about 4,000 facilities out of 8,726 certified mammography facilities in the county offer 3D mammograms.

Benefits of using our current system at Advanced Women Imaging

The fight against breast cancer is not one-dimensional.

At Fujifilm, we are committed to doing our part, at every opportunity, to deliver value through imaging innovation. ASPIRE Cristalle with Digital Breast Tomosynthesis (DBT) is built smarter because it is built with insight into image quality, operational excellence, and better patient experience.

It’s time to get smarter about 3D mammography

INSIGHT #1 Mammograms don’t work if women won’t get them.

The intelligent design of ASPIRE Cristalle’s patented Comfort Paddle provides noticeably less pain and anxiety for the patient. With its unique flexible, slotted 4-way tilting paddle design, it provides more even compression, that combined with the Intelligent Automatic Exposure Control (iAEC) image processing, make it possible to provide more optimized images at low dose for every breast type, including implants. 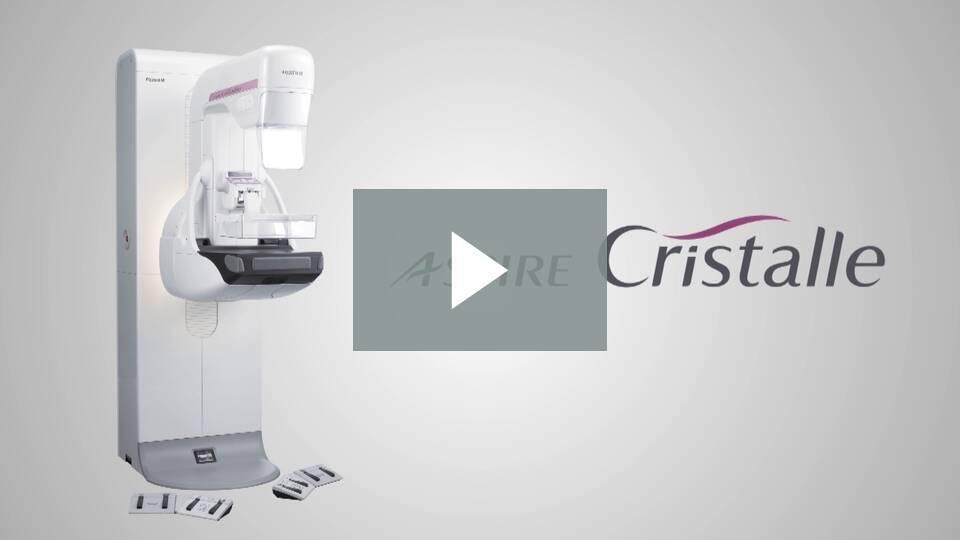 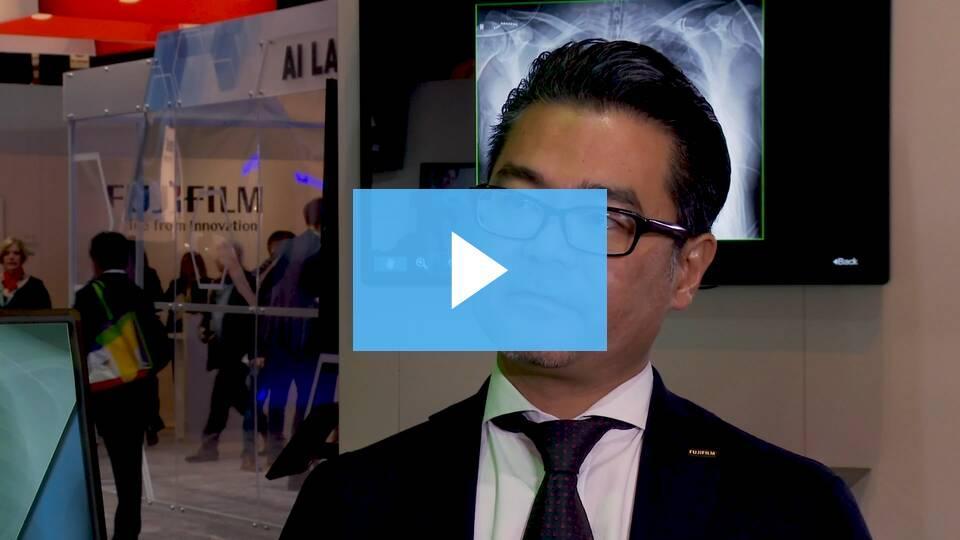 To learn more about breast cancer risk and other options to keep your risk as low as it can be.

The information in this document does not replace a medical consultation. It is for personal guidance use only. We recommend that patients ask their doctors about what tests or types of treatments are needed for their condition.